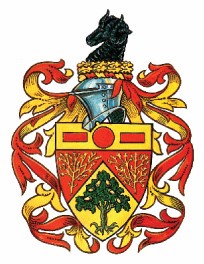 Maybe the prevailing spirit of patriotism and pageantry generated the idea, as it was in 1952, the year when Queen Elizabeth acceded to the throne, that the Council arranged to have its own Coat of Arms. The project came to fruition in 1953, her coronation year. The Coat of Arms can now be seen above the front door of the Town Council Offices and depicts two plants and four industries associated with the town.

In the centre is an oak tree bearing acorns, representing the Bounds Oak. There is no truth in the tale that the Bounds Oak is mentioned in the Domesday Book, indeed, no details of any kind about Southborough are to be found there.  The Bounds Oak stood on the Great Bounds estate, which was the base of the Lord of the Manor of both Southborough and neighbouring Bidborough for many centuries. It may have been a gathering place for celebrations. The over mantel on one of the fireplaces in Great Bounds, believed to be around a hundred years old and dating from the period of Mrs Harland’s ownership, showed people dancing around the oak. The former manor house was demolished in the mid-twentieth century but the tree survived a little longer and was cut down after succumbing finally to old age and fire damage.  Today the oak tree on the Coat of Arms still symbolises that, although in the twenty-first century, the Town Council now fulfils the role of Lord of the Manor, most notably by taking care of the ancient Common.

The other plant, or plants, on the Coat of Arms is a pair of broom bushes in bloom, the plant from which High Brooms is thought to have derived its name. The place name, in the form High Brooms Wood, has been traced back to 1701.  Just a fragment of open space now remains of the woodland shown on maps in the mid-nineteenth century, now part of the recreation ground on the Tunbridge Wells side of South View Road.

Two symbols reflecting a long vanished era, even back in 1953, are an iron helmet and a black sheep’s head.  The iron industry operated in the Southborough Valley for about a hundred and fifty years, from the reign of Edward VI, with many ancient field names in that part of the town hinting at connections with iron workings, such as the Bellow Meister’s Field. The town also has a long history of smaller scale forges going back to the Tudor period, probably shoeing horses and producing small-scale goods.

The sheep’s head represents the textile industry. The oldest known artefact alluding to the textile industry in the town is a fireback depicting a weaver’s shuttle, featuring the date 1577 and the initials RG (almost certainly for the landowner, Robert Goldsmith) that once stood in the fireplace of The Weavers on London Road. So far, the reason for him choosing this particular logo is unknown.  The textile industry provided employment for various social classes in the town. William Cackett, a Southborough maker of linsey-wolsey (a mixture of linen and wool), was the unfortunate victim of a court case of 1609 when a Tonbridge butcher was convicted of stealing a sheep from him valued at 11d. Seventeenth century clothier, John Latter, was more affluent, with fine furniture and a large house derived from his successful textile business.

A small red circle depicts the cricket ball making industry, in heraldic terms a “torteau” or “roundel gules”.The shape usually represents a cake of bread and the Southborough Coat of Arms is believed to be unique in using this heraldic symbol to represent a cricket ball.  The industry probably began as a cottage industry at the beginning of Queen Victoria’s reign. The earliest record in a business directory of 1840, records the firm Cook and Wickham, with the 1841 census indicating that Philip Wickham lived at Modest Corner. Over several decades, cricket ball production was to be found in small factories around the town. Perhaps most notable was Twort’s factory in Park Road, whose products were used for Test Matches.  Emblematic of British victory on the pitch, the factory was sadly bombed by a German V2 rocket in 1944. In spite of the Council at that time preferring that the factory be rebuilt away from a residential street, there was much insistence from the townspeople that it should not be moved from the original site.

The Coat of Arms also depicts two bricks, using the heraldic device the “billet”. These symbolise the brick making industry, particularly the High Brooms Brick and Tile Company, which operated in the late 1870s and led to the rapid growth of that part of the town.  Both cricket ball making and brick making were in operation in the town when the Coat of Arms was adopted but have long since ceased.

The Council’s motto, adopted in 1962, is two simple Latin words:

“Propria Tuemur : We take good care of the things which belong to us”

The Southborough Coat of Arms is granted to the Town Council and may only be used with permission.

For more information on the history of the town, check out the Southborough Society.  They are the civic, heritage & amenity society for Southborough and collect and collate lots of information about our special town.